The Robosapien is a remote controlled robot that is just over 1 foot tall. He can be controlled by remote, but he also can use infrared eyes that light up red when he's turned on to free roam. With his optical and impact sensors he has the ability to dodge objects on his own. When you turn him on he will yawn and give a masculine "Uh Huh". There is a newer version called Robosapien X that looks different and a lot better than the first one but with the same main features. 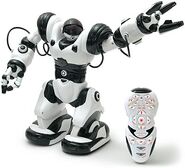 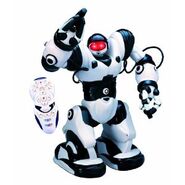 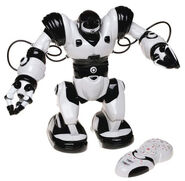 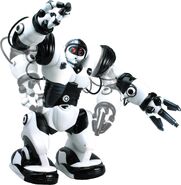 Add a photo to this gallery
Retrieved from "https://robotics.fandom.com/wiki/Robosapien?oldid=7150"
Community content is available under CC-BY-SA unless otherwise noted.